We’ve discussed the problem of gender discrimination in healthcare on this blog before, including the way that insurance companies treat women and pharmaceutical companies’ inclusion of women (or lack thereof) in drug trials. 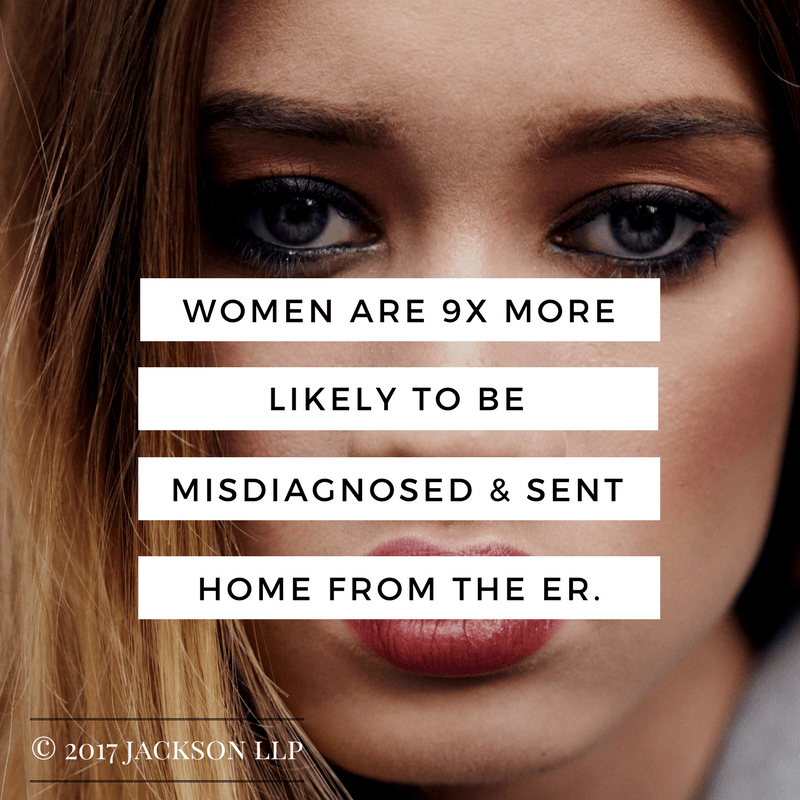 But it’s not just us who’re focused on the imbalance.  Canadian Prime Minister Justin Trudeau recently visited with President Trump to launch an initiative focused on upping women’s involvement in business and the workforce.  Last month saw a massive day of protesting with women’s marches spread across the U.S. (and even other countries, who marched in solidarity).  Republican lawmakers looking to repeal the ACA’s contraceptive coverage have spurred Melinda Gates’ promise to fill the coverage gap that their efforts will leave if they’re successful.  Regardless of where you fall on the political spectrum, the evening news confirms that many feel that women’s rights are on the line in America today.  And, perhaps, no one feels that so strongly as women in pain.

The Atlantic columnist Joe Fassler wrote in 2015 about feeling appalled by the treatment his wife received in the emergency room.  His wife came to the ER in severe pain, but no one seemed in a hurry to help. The average ER wait time in the U.S. is 28 minutes, but his wife writhed in pain for over 2 hours. Medical personnel downplayed its severity; their responses fell on a spectrum between condescending and dismissive. One nurse even said that she likely just had kidney stones: a common, treatable, uncomfortable but never deadly (read: “quit-your-whining”) issue.

So, what was all her fuss about? Fassler’s wife was suffering an ovarian torsion, which is very rare and often deadly.  And although her ovarian torsion would’ve been apparent from an external abdominal exam, no one saw it. 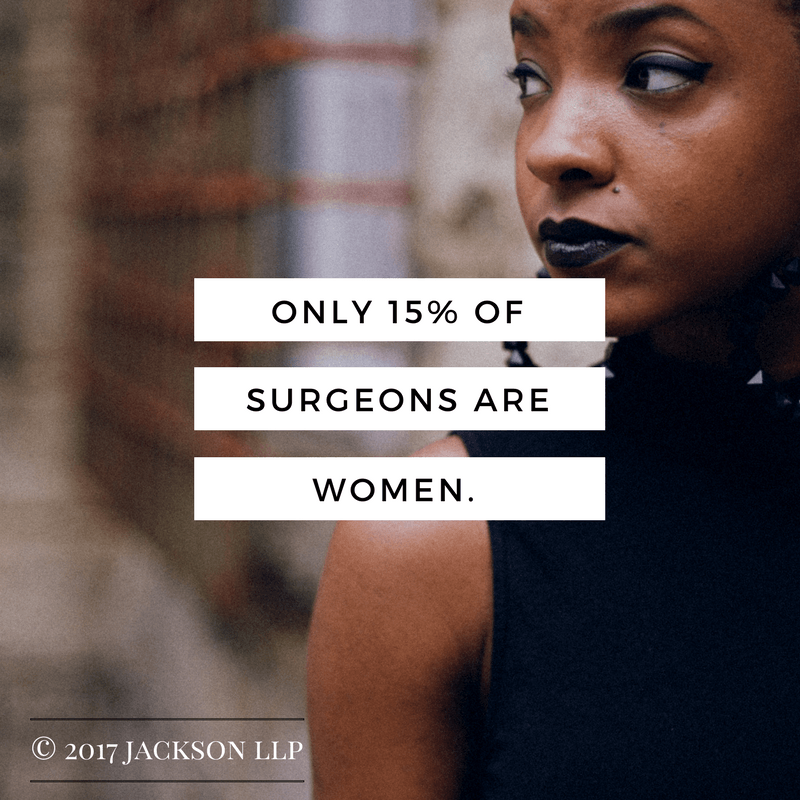 Fassler didn’t witness his wife experiencing a one-in-a-million nightmare.  Women are seven times more likely than men to be misdiagnosed and sent home from the ER. Many other women who suffer similar scenarios experience discrimination that’s too subtle to be immediately diagnosable (literally).  In 2013, a college girl who’d been experiencing severe pain “episodes” as a teenager died of undiagnosed gallstone complications. Upon presentation, her doctors would ask her “what is it today?,” rather than run tests that would have easily provided a diagnosis. The widely-held perception of women in pain as dramatic menstrual-cramp sufferers has cost women their lives.

According to an early aughts study by the University of Maryland’s law school, titled “The Girl Who Cried Pain: A Bias Against Women in the Treatment of Pain,” the researchers found that women in pain are more likely to have their pain be attributed to emotional or psychogenic factors.  Although women report more severe levels and more frequent incidences of pain than men, their pain is treated less aggressively.  And then, a 2011 Institute of Medicine report corroborated that women are more likely to suffer from pain and have higher pain tolerances, but their reports of pain are more likely to be dismissed by providers.

A female ER patient cannot bear the burden of a provider’s biases.  It’s crucial that providers – especially those in the emergency or urgent clinical settings – critically examine each patient, without regard for the patient’s gender.  But what happens when these biases are unconscious (which they undoubtedly are in most circumstances)? 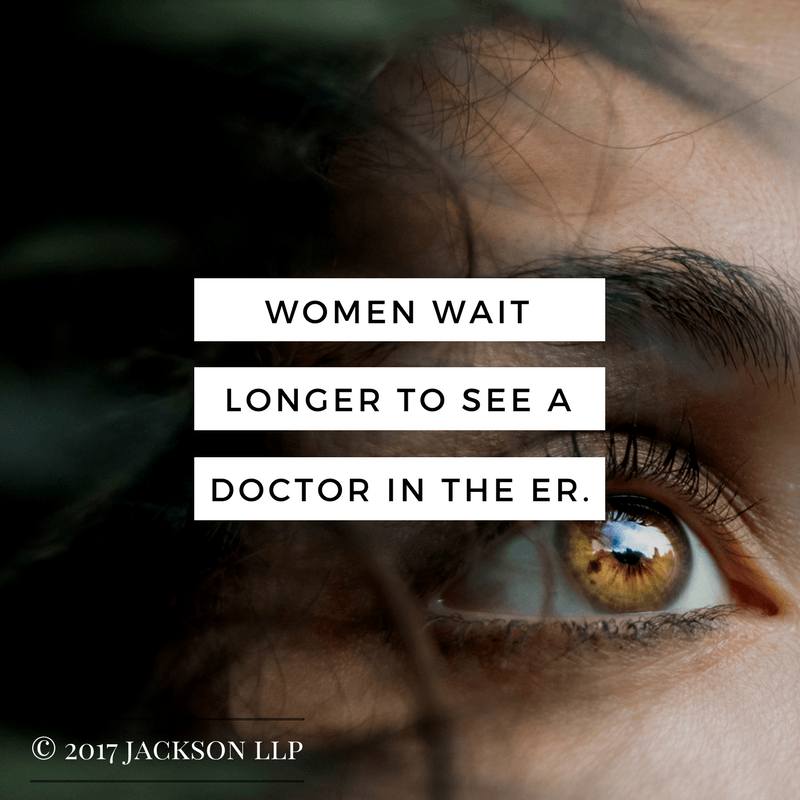 After doing some supplemental research, I discovered that women have far higher rates of healthcare utilization than men.  That is, women visit the doctor with far greater frequency.  This means that providers are more accustomed to seeing female patients present with concerns across the board, including in the ER setting.  So, when a male patient visits the hospital, there is perhaps an implicit sense of urgency by the medical staff – i.e., “it must be serious if he’s here!”

Female and male healthcare providers both exhibit this bias, and it’s not an American phenomenon.  Dr. Mary O’Connor of the Mayo Clinic believes it originates with an unconscious bias:

We are socialized to believe that women are more likely to have pain than men, or at least are more willing to complain of pain than men. Furthermore, women are seen as the “weaker sex” and our decisions may be negatively influence by the “time of the month” or hormonal status. While we know that there are true biological difference in pain pathways, physical strength and hormonal levels, these differences are framed in a negative light for women.

It’s imperative that providers receive training to become aware of their biases and to overcome them – it’s an exercise in checking their blind spots.  This will be easier done when medical staffs become more diverse and better reflect the patient population.  Studies show that only about 15% of surgeons are women, and that more women are deterred from joining their ranks because of the perception that surgery is an “old boys club.”  Dr. O’Connor contends that, by increasing the number of female surgeons, the culture of the hospital will begin to shift.

If you have questions about how this might impact your practice, about the antidiscrimination laws that govern and condemn this conduct, or about how to implement better policies and procedures, please reach out!  We are always available for interactive, poignant, and timely workplace antidiscrimination training too.  Email Erin at erin@jackson-legal.com.

Diane E. Hoffman, and Anita Tarzian, The Girl Who Cried Pain: A Bias Against Women in the Treatment of Pain, Journal of Law, Medicine & Ethics (2001).