A food desert is a geographic area that lacks fresh fruit, vegetables, and other whole foods.  These arise from an absence of grocery stores, farmers’ markets, and healthy food providers, and the United States is full of them (1). This problem is linked to obesity, poor diet choices, and hunger.

The USDA defines a food desert as a community in which at least 33% of its members live more than a mile from a supermarket (1).  According to a USDA report, about 2.3 million people live more than one mile from a supermarket and do not own a car (3).  These food deserts usually overlay impoverished areas that are replete with fast-food restaurants.  With the neighborhood food options being low-cost meals high in sugar and unhealthy fats, it only exacerbates our nation’s obesity epidemic (1).

Obesity rates have tripled since 1980 and the annual cost of treating obesity in the United States has risen to over $150 billion per year (2). To tackle this issue, former First Lady Michelle Obama’s “Let’s Move!” Campaign aimed to expand the availability of fresh, healthy food (1). Unfortunately, bringing fresh food to areas chockfull of fast food joints doesn’t always solve the problem: fast food tends to be more convenient and less expensive.

The convenience and cost allure of fast food carries dire health consequences, and it explains why low-income families suffer from higher rates of obesity, type 2 diabetes, cardiovascular disease, and other diet-related conditions (3).

The incidence of diabetes among US adults doubled between 1996 and 2007, and type 2 diabetes accounts for 90 to 95 percent of these cases (3). Twenty years ago, type 2 diabetes was uncommon in those under age 40, but in the past decade type 2 diabetes has increased among teens at the same rate as obesity (2). Type 2 diabetes is rising most rapidly among people of color, who are also the most likely inhabitants of food deserts (3).

“Should we grab McDonalds or some fresh, organic groceries from Whole Foods that we’ll then cook for dinner?,” said no one ever. 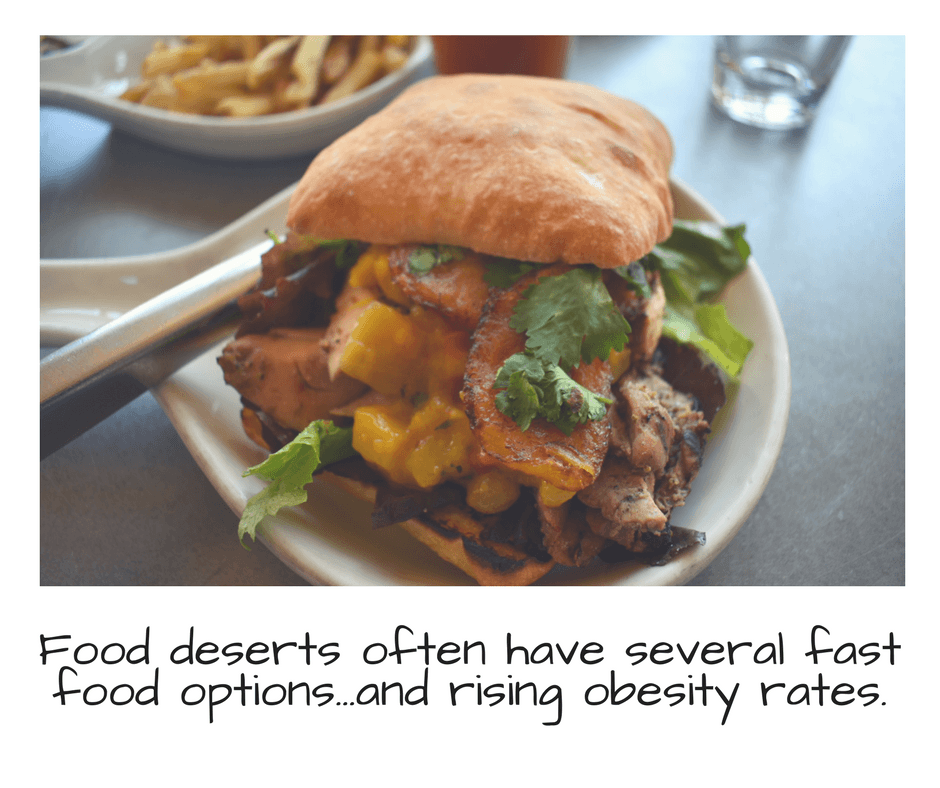 What superficially looks like a lifestyle choice is far from it.  Fresh food requires shopping, preparation, and cooking time – all things that require a significant time investment that is often incompatible with those who are dually employed, those responsible for full-time childcare, or those without access to transportation.

In Chicago, more than 500,000 people live in a food desert (3). In September of 2016, Mayor Rahm Emanuel cut the ribbon of a new Whole Foods on Chicago’s south side, celebrating it as progress towards reducing Chicago’s food deserts (4). However, this attempt fell flat as an Aldi store already existed just blocks away.  While good for the community, the Whole Foods did little to dent an actual food desert (4). Some commentators heralded the grand opening as, above all, a political moment for the mayor, who sought to garner support from the African American community surrounding the store (4).

Food stamps: where to spend them in the desert?

Living in a food desert, food stamps will only get you so far — often just to the corner store.  It’s there that you can purchase typical 7-11 fare: prepared foods (hot dogs, donuts), convenience meals (think preservative-filled Lunchables or salty Cup-O-Noodles), and carbs (Doritos, Fritos, Cheetos), and sugary soda.  If those are your options, then those are your groceries – and they’re likely not much healthier than a shopping cart filled with McDonald’s menu items. 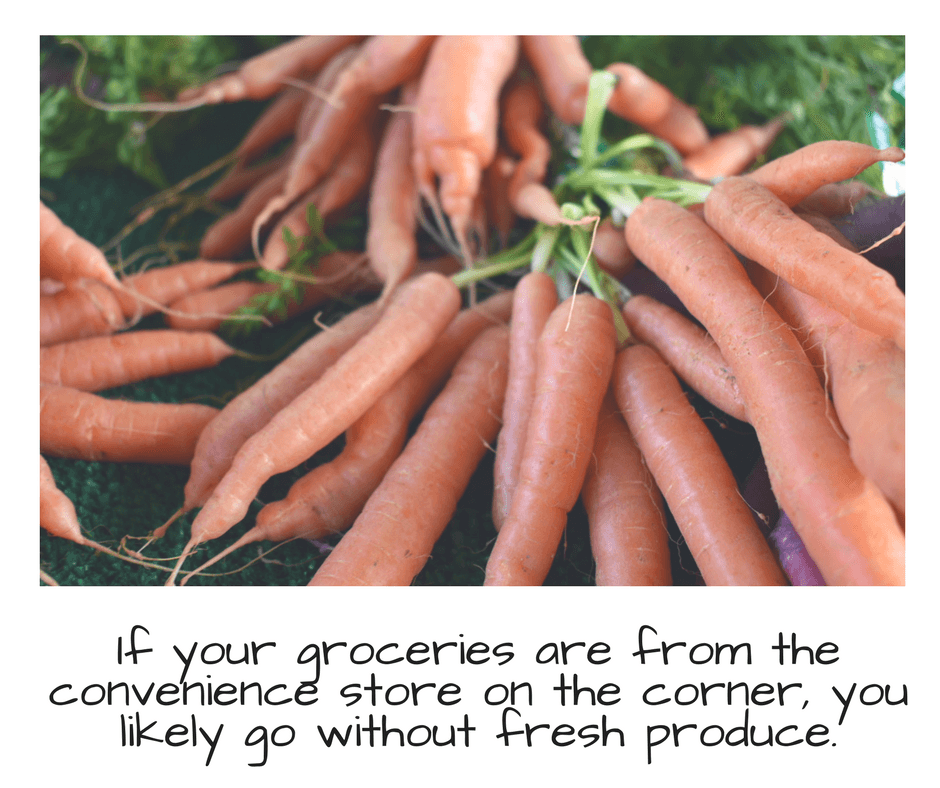 Some states, like Illinois, have been working with food delivery services like Peapod and AmazonFresh to encourage their growth into lower-income areas that often lack grocers.  They have further advocated for food stamp spending eligibility on these food delivery services, with the idea that anyone with internet access, regardless of transportation or grocer availability, could receive fresh foods, delivered to their door.  Originally branded as luxury services for those without time to shop for their own groceries, these companies could bring fresh food to communities without the ability to access them otherwise.  How cool would that be?

Healthcare providers: are your patients hungry? Hunger can masquerade as many different medical conditions, and we often remind providers to screen all of their patients for hunger when making diagnoses.  You can do this easily – just integrate it into your intake forms!  It can also help you to determine if your patient has a diet high in inflammatory foods or caffeine, or short on veggies and water.  When soliciting this information, remember to be a judgment-free zone.  Reiterate to your patient that you’re there to help and that accurate information won’t be used against them in any way – it just helps you do your job better!  And, as always, if they are hungry, be sure to point them towards resources that can help fill their bellies and fridge.  Because just like hungry kids don’t learn as well in school, hungry patients don’t heal as well.

Erin K. Jackson is Jackson LLP’s Managing Partner. She is responsible for all aspects of firm management, is a sought-after speaker for healthcare conferences, and is a published author. She is specifically focused on the intersection of the patient experience in healthcare with the legal and ethical responsibilities of providers.